The Safe Climate Transport Campaign has launched several aggressive, targeted campaigns on social media. Below are some examples: 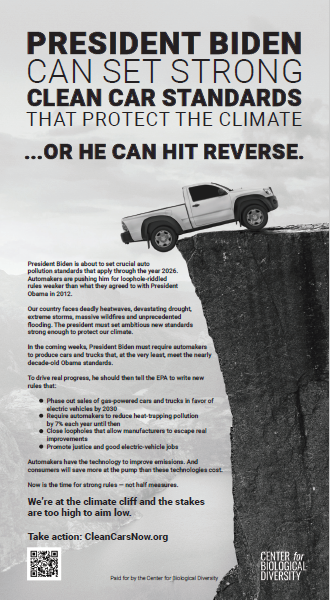 Ford: Then and Now

These comparisons of what Ford said about their vehicles and clean air decades ago and what they say now prove that Ford is still fighting clean air and spreading lies about crucial pollution laws.

Ford is Tough On…

Ford claims that their vehicles are built “Ford Tough.” This Twitter campaign recognized that because Ford’s vehicles are so needlessly polluting, Ford is actually tough on polar bears in the melting Arctic, kids who suffer from asthma, and the climate at large.

In December 2017, this water fountain at the EPA Headquarters in Washington, DC exploded. We took advantage.

This image imagines that Ford is so grateful for Trump’s rollback of the CAFE Standards that they have named a new vehicle in his honor.

Trump’s Gift to the Automakers

This series recognized the 5th anniversary of the Clean Cars Standards in light of Trump’s decision to roll them back.