Building clean vehicles is not rocket science – it is just smart auto mechanics.

Americans deserve vehicles that use better technology to cut global warming pollution and save money. Automakers hold the keys. 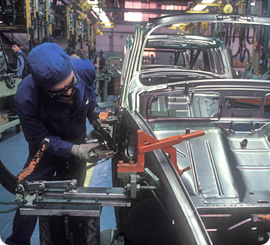 The responsibility for building cars that pollute less rests with the automakers.

But it is ultimately up to the automakers to build vehicles that meet these standards. The products they develop determine whether American consumers have a real choice when they look to buy fuel-efficient vehicles.

While the industry continues to drag its feet, the challenge of competing in a global market demonstrates that automakers must develop the next generation of vehicles if they want to survive in the new marketplace. They must learn the lesson of their near-death experience: Some of the most popular vehicles they now produce came in response to strong mileage and emissions standards, after the industry shunned efficient vehicles for years. Hybrid vehicles are rolling advertisements that better fuel economy is not only possible – it’s affordable. It is time for the entire industry to move forward and produce clean vehicles that tackle the environmental and the financial challenges we face.

A History of Industry Opposition to Higher Fuel Economy

Among the provisions the auto industry succeeded in winning when it acquiesced to the Obama administration’s strong mileage-and-emissions rules was a “mid-term” review of the program. Not for nothing do some in the industry call it an “exit ramp.” The industry’s long-running opposition to tough rules gives us reason to be concerned.

Even after automakers met the first fuel economy standards in the 1970s and 1980s, they did not abandon their opposition to requirements that they produce cars to meet higher miles-per-gallon standards. For years, they blocked repeated efforts to update the rules. During the 1990s, the auto industry led the fight that killed fuel economy bills in Congress and prevented the Department of Transportation from even considering raising the standards. At the same time, the industry exploited multiple loopholes in the existing law, principally by building more and more SUVs to take advantage of weaker fuel economy standards for light trucks. The industry also lobbied against legislation that would have raised fuel economy standards to 40 miles per gallon, from 27.5 mpg. This legislation fell three votes short of Senate approval in 1990.

Environmentalists looked west to California, winning adoption of the Pavely Law, which set global warming standards for new cars and light trucks and then convincing a dozen other states to adopt California’s new law.

Confronting the prospect of having to produce cleaner cars for states representing 45 percent of the car-buying public, automakers began to reconsider their opposition to nationwide standards. They did try to block legislation raising the miles-per-gallon standard in 2007, but failed. Congress was no longer willing to listen to the automakers’ false arguments. It passed the Energy Independence and Security Act of 2007, which set the first significant increase in fuel economy standards since 1975. Nevertheless, Detroit fought these provisions until the end, attempting to weaken the standards and to preempt the states from setting greenhouse gas emissions limits for vehicles.

Enter Barack Obama. In 2010, the president put in place standards that by 2016 will establish a fleetwide average of 35.5 mpg. He placed the Environmental Protection Agency in charge of setting future standards rather than the National Highway Traffic Safety Administration, which for years had declined to tighten the standards.

As soon as this rule became final, Obama brought together government officials, automakers and environmental groups to discuss tougher standards. The result: A 54.5 mpg standards to take effect in 2025.

Instead of trying to undermine federal and state laws and block improvements, automakers must take responsibility for improving their vehicles. Responsible companies must begin building entire fleets of clean vehicles that use modern technology to boost fuel economy and reduce global warming emissions. It is not enough to build a few clean vehicles while the rest of the fleet remains stuck in neutral. All cars and light trucks must begin making dramatic improvements in fuel economy. This is imperative not only for the health of the environment, but also for the financial success of the automakers.

It is time for the auto industry to rethink its product plans and its stance on fuel economy. Responsible companies should stop marketing and producing inefficient vehicles.

Pickup trucks should be vehicles once again focused on work. Light trucks should be found at construction sites and small businesses, not hauling lattes from Starbucks. Large SUVs like the Cadillac Escalade need to become passions of the past.

These grossly inefficient vehicles guzzle gasoline and represent the worst of backward design. At the same time, companies need to be stopped from exploiting such loopholes as the provision governing flex-fuel vehicles. It allows them to artificially inflate their official fleetwide fuel economy just by producing vehicles that can, but rarely do, run on ethanol.

The auto industry should be held accountable for its actions and products. For many years, the industry did the minimum that the law required, and fought tooth and nail to block any government action. In the new economy, successful companies will be the responsible ones that move smartly forward into the next generation of automotive technology. The recalcitrant will be left behind.

Some automakers lead the industry in fuel economy, while others have fallen behind. Currently, Honda and Toyota have the highest fleetwide fuel economy and lowest average greenhouse gas emissions of any major automaker. Both were early developers of hybrid-electric vehicles. Their commitment to better technology has helped boost their financial performance and enabled them to survive the recent shifts as the industry has tried to adjust to dramatically higher gas prices.

General Motors and Chrysler are on the opposite end of the spectrum.  Year after year, they have reported the worst fleetwide fuel economy of the major automakers. They have been slow to put new fuel-saving technology into their vehicles. As a result, despite an $85-billion taxpayer bailout, they have lost market share and suffered financial losses as consumers have shifted to more fuel-efficient vehicles.

Over 20 years, American automakers focused on producing inefficient SUVs and pickup trucks. This strategy was initially profitable. But it is now haunting the Big Three. After posting record losses, they are still struggling with residual bankruptcy issues. Let’s hope they have learned their lesson and are turning a corner.

Automakers that received billions of dollars in bailouts from the taxpayers work for us now. They shouldn’t be spending our money to fight good laws and make bad vehicles. It is time for them to be good corporate citizens.

Ignoring the need for better fuel economy and a full range of high-quality products, they are trying to foist off an another generation of consumers the same SUVs and pickup trucks that got them into trouble in the first place, rather than building the efficient vehicles that sell well. Because they did not develop better car technology, they now have vehicles whose fuel economy ranks at the bottom of their class. As a result of these decisions, American autoworkers have lost their jobs and the companies’ futures are in jeopardy. Unless they change course, General Motors, Ford and Chrysler, one-time icons of American industry, face increasingly dim futures.

The Race to Succeed

While some manufacturers continue to lead the industry, they still fall far short of where modern technology can take us. Toyota and Nissan, leading producers of hybrids and electric vehicles respectively, are also building inefficient SUVs and other trucks. They need to refocus and produce highly efficient vehicles throughout their fleet. And the laggards need to steer themselves onto the road of higher fuel economy and profit.

The auto industry must act responsibly. It needs to recognize that it must embrace better technology and develop vehicles that dramatically reduce global warming emissions by breaking our reliance on oil. The industry leaders must stride forward to develop a new generation of clean vehicles.